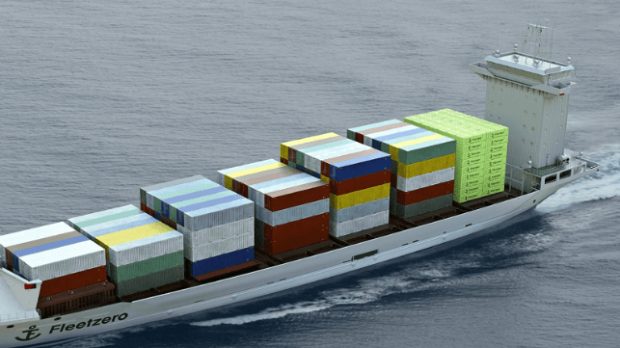 Electromobility is playing an increasingly important role on the road, especially in the passenger car sector. This is not yet the case on the water and in the air. A US start-up wants to change this in the case of cargo ships: the proposed method is based on a battery system that is installed in a standard container and can be quickly loaded and unloaded and thus replaced. A first ship to use the system is expected to be ready in 2023.

With electricity across the oceans

The solution for electric boating that the startup Fleetzero has in mind is a kind of “energy container”. It should weigh about 8 tons and be able to store 2 MWh with its battery cells. The interior of the container is particularly protected against knocks and other shocks and the container itself has a special fire protection. For the cells, the company relies on lithium iron phosphate (LFP) batteries, which are said to be safer and more durable than NMC batteries.

For longer journeys, Fleetzero plans to exchange the depleted batteries in ports. With the help of the container infrastructure present there, the battery containers could be unloaded and replaced by charged ones. The empty batteries could then be charged on site in the harbor to be ready for the next ship. In busy ports, the ships could also be powered by tugs with batteries on board.

Another discussed alternative to fossil fuels in freight shipping is hydrogen. According to Fleetzero, this has the disadvantage that it is a volatile gas that would be difficult to store. In addition, a special infrastructure is needed for hydrogen, just like for toxic ammonia, which is also traded as an alternative.

The pursuit of ever-larger container ships coupled with the use of fossil fuels is a problem given rising emissions, Fleetzero said. With the replacement batteries, smaller ships are also profitable. These could then go to more ports than the large variants and maneuver in them better.

Less maintenance and no ballast water

Electric drive systems are also mechanically simpler and therefore require less maintenance than conventional drives. In addition, no tanks for fuel and ballast water are required, so that space for cargo would be available. On ships with conventional propulsion, ballast water is needed to compensate for the weight of the fuel consumed. Battery systems, on the other hand, do not change weight when discharged. Ballast water is, among other things, responsible for the introduction of foreign animal and plant species into other ecosystems.

Fleetzero was founded by two graduates of the US Merchant Marine Academy and already claims to have a prototype container battery. In mid-2023, the first ship that has been converted accordingly will set sail for the first time.

via The Maritime Explorer