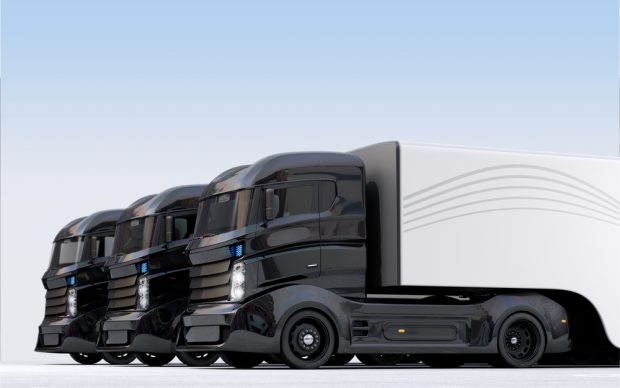 Amazon obviously takes its climate goals seriously. In 2019, the group announced its intention to be CO2 neutral by 2040. To this end, the truck fleet is now being tackled: little by little the diesel trucks are being replaced by e-trucks. The first five vehicles will start in the UK.

The new fleet saves 170 tons of CO2 per year

Electric drive trucks are still extremely rare on our roads. Diesel remains the absolute leader when it comes to moving heavy loads on the road. Amazon now wants to take a step into new territory and trade in its combustion engines for e-trucks. To this end, the group has now purchased five electrically powered vehicles that are driving through Great Britain. It is a 37 tonne CF Electric, produced by DAF. The cars cover about 500 kilometers on one charge at a time. All electric trucks together have to cover a total of 160,000 kilometers per year in Amazones, saving 170 tons of CO2. That sounds like a good start.

The entire delivery fleet must be converted by 2030

They are deployed in the Milton Keynes and Tilbury region. The large vehicles will receive further electric support at the end of 2022, while the diesel fleet is slowly melting away. Amazon relies on green power when purchasing energy. The entire delivery fleet must be converted by 2030, i.e. in just eight years. Some of the Group’s smaller vans are already electric and there is a permanent partnership with Mercedes-Benz and other car manufacturers.

Online commerce has boomed in the last two years of Corona, vans of all kinds have long been part of the mainstream cityscape. Especially when consumers no longer get in the car to do their shopping and drive to the city center, it is necessary to clean the armies of transport vehicles.